In Recognition of Tinnitus Week 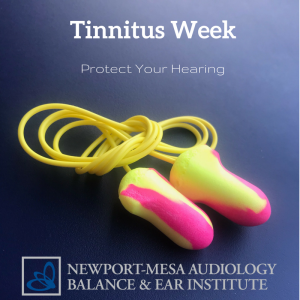 This week, we are helping to spread awareness and provide support to those afflicted by tinnitus. The Tinnitus Week initiative has grown to become a global collaboration between major hearing-centered organizations including the American Tinnitus Association and British Tinnitus Association.

Tinnitus impacts millions around the world, an estimated one in 10. 45 million are affected in the U.S. alone. The more awareness that can be brought to the issue, the greater likelihood for more research funding and support programs for sufferers.

Symptoms of tinnitus are commonly referred to as ringing in the ears but can also be a variety of different perceived sounds, tonal and pulsing. It can manifest itself as ringing, hissing, static, crickets, screeching, whooshing, roaring, pulsing, waves, buzzing, dial tones, or even music. The saying, “it’s all in your head” applies. In almost all cases, tinnitus is a subjective noise; only the one afflicted can hear it.

To hear samples of sounds that tinnitus patients may hear, the American Tinnitus Association has posted several on their website. Some include:

Statistically, the populations that are more prone to getting tinnitus are Caucasians, males, older people, those who work in noisy environments, musicians and those with behavioral health issues.

Tinnitus isn’t a disease in and of itself, but can be a symptom of another underlying health condition. These could include hearing loss (#1 cause of tinnitus), middle ear obstructions, head/neck trauma, Temporomandibular Joint Disorder (TMJ), sinus pressure to name a few. Left untreated it can affect people’s overall well-being, leading to anxiety, depression, sleep disruption, inability to work and social avoidance.

Since tinnitus is a subjective condition, it can be difficult to diagnose and measure, but there are ways we can help. Our doctors of audiology have tools and clinical methods to help evaluate and diagnose tinnitus in our patients. If you or someone you know is affected by tinnitus, we encourage you to contact us to set up an appointment. You don’t have to let it continue to negatively impact your quality of life.

Treatment for tinnitus may include addressing any underlying hearing loss, managing your sleep better, sound therapy, relaxation techniques and overall health management. But the best way to prevent tinnitus is to protect your hearing in the first place. Remember to always wear hearing protection in noisy environments, especially if it’s part of your profession.